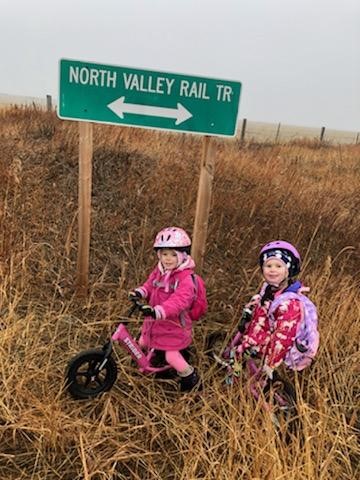 All of our trails are being built with our children and future generations in mind.

Many thanks to our trail supporters for sending in letters of support for the Heinrich Demonstration Trail. On Monday, we presented the trail proposal to the Valley County Commission, and following a one-hour public hearing, the Demo trail was passed by a 3-0 vote. Yay!

Commissioner Dave Bingamin made the motion to approve the trail, Commissioner Sherry Maupin seconded the motion, and Commission Chairman Elt Hasbrouck voted in favor to make it unanimous.

We are making a few tweaks to the draft MOU between Valley County and VCP required for the project to finalize the approval next week. We hope to start construction on the Demo trail this fall.

We’d also like to thank Andrew Mentzer and the West Central Mountains Economic Development Council (WCMEDC) for their key supporting role in the whole pathways effort. The WCMEDC worked to raise $40,000 for the International Mountain Biking Association (IMBA) feasibility study on our singletrack sidewalks plan, and WCMEDC was a key supporter of the VCP Master Plan major update in 2017. Andrew worked directly with Valley County on developing the Singletrack Sidewalks ordinance, approved in February 2020. It takes a team effort!

Here’s an editorial from the McCall Star-News, endorsing our approach to building a series of singletrack sidewalks throughout the valley to connect our communities, provide a safe place for our children and people to walk, run or bike to school, promote health and fitness, and economic development.

Editorial: Singletracks blaze the way to more paths
(From the Star-News, Oct. 1)

Singletrack pathways are the future of recreation in Valley County, and county officials should be praised for allowing them to happen.

This week, Valley County commissioners approved a demonstration project that will see a 4,000-foot trail developed along the north side of Heinrich Lane between the southern trailhead of the North Valley Trail and Norwood Road.

The project is unique because of its simplicity. Previously, the vision of recreational planners was to build paved, eight-foot-wide, separated pathways to accommodate walkers, joggers and bicyclists. But the costs of such pathways have become staggering, at $100,000 to $250,000 per mile. Singletrack paths are the low-tech version of separated pathways and they work as well or better than their more sophisticated cousins and only cost $25,000 to $53,000 per mile.

The singletracks are two to three feet wide and are carved out of the available public rights-of-way running along county roads. These are basic dirt trails that make productive use out of rights-of-way that do little more than grow weeds. They provide a safe and inviting amenity to the growing numbers of mountain bike riders who live in or visit the area. The Heinrich Lane project will show singletrack pathways are compatible with the adjacent land uses and set the stage for more paths.

The concept is the brainchild of Valley County Pathways, the nonprofit group that developed the North Valley Trail, which runs 3.5 miles south of McCall from River Ranch to Heinrich Lane and which is growing each year in popularity. The group envisions building about 70 miles of singletrack pathways throughout the valley to connect McCall, Donnelly and Cascade, even linking as far as New Meadows and the Weiser River Trail.

Singletrack trails are a cheap and easy way to expand an important segment of the local resort economy. They may not be fancy, but they get the job done, and should be encouraged wherever Valley County Pathways wants to put them.